More to beauty than meets the eye Hopeful contestant: Hejnowska is among those vying for the state-level Unduk Ngadau title this year.

KOTA KINABALU: She has hazel-coloured eyes, light brown hair and a relatively fair complexion but Maya Hejnowska is able to speak fluent Kadazan, one of Sabah’s native languages.

The 21-year-old continues to take natives by surprise and heads turn whenever she starts speaking.

Those not in the know would think that she is just another foreigner visiting the state.

However she is of Kadazan-Polish heritage and has lived in Sabah all her life, and as long as she can remember, Kadazan has been her mother tongue.

Hejnowska, who is among those vying for the state-level Unduk Ngadau (Harvest Queen) title on May 30 and 31 for the Kaamatan or Harvest Festival, said there were – and still are – many doubters when she first decided to join the pageant.

“I get comments like ‘do not make posts in Kadazan when you can’t speak the language’ and more on social media, ” said the eldest of three siblings.

“But it doesn’t really bother me because I know I speak the language well. It is the language I speak at home – although I have to admit there are still many terms in the language I’m not familiar with, ” she said.

Hejnowska, who is a Universiti Malaysia Sabah student, said her late grandmother had instilled the practice of speaking only Kadazan at home.

She said this “rule” also applied to all her cousins who came to visit.

She believes a person of mixed parentage can call themselves true Sabahans if they live here, speak the language, learn the culture and history of their own ethnicity – and most importantly – are nice to others.

“Culture is about how we live our day-to-day lives while incorporating traditions – be it the language we speak, the food we eat or anything related, it is not just about blood and ethnicity, ” said Hejnowska.

Asked why she joined Unduk Ngadau, she said she did not consider taking part initially but after encouragement from family and friends as well as the persistence of her manager, she decided to give it a go.

“This is a chance for me to try what I never dreamt of and challenge what I can do, apart from learning more about my ethnicity and other cultures in Sabah better, ” she said.

Hejnowska hopes the youth of today will take the initiative to learn more about their ethnicity, culture and language – and that of others too – so that they can better understand one another’s customs and live harmoniously together.

The Unduk Ngadau is held to commemorate Huminodun, daughter of ancient gods Kinoingan and Sumundu, who was said to be the most beautiful and kindest girl who ever lived.

According to the legend, Huminodun sacrificed herself during a famine so the people would have food to eat.

The chosen Unduk Ngadau will be a symbol of beauty and portray what a true Sabahan woman is.

The legend is the basis of the annual month-long Kaamatan Festival, which culminates on May 30 and 31.

Kaamatan is when the people of Sabah, especially farmers, traditionally give thanks to the gods for an abundant harvest. 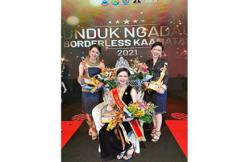