PETALING JAYA: In an effort to bridge the digital gap among the B40 group, a total of 8.5 million Bantuan Prihatin Rakyat (BPR) recipients will receive financial assistance in the form of Internet data plans and subsidies to buy mobile devices amounting to RM3.5bil from the Jaringan Prihatin Programme.

In terms of affordability, he said there was still a gap in financial capability to obtain Internet access.

Although the cost of the lowest broadband plan in Malaysia was 1.1% of the country’s gross national product (GNP) per capita, which is in line with the United Nations guidelines, it was still high for a certain section of the low-income community, he said.

In fact, smartphone usage consumes a large portion of the monthly earnings of those from low-income households, he said.

“Smartphone costs also take up a big part of the income of the lower income households.

“The programme totalling RM3.5bil will benefit around 8.5 million people from the B40 group to be able to own mobile devices or enjoy broadband plans.

“The government will spend RM2bil while telcos and service providers will give RM1.5bil in forms of free data. 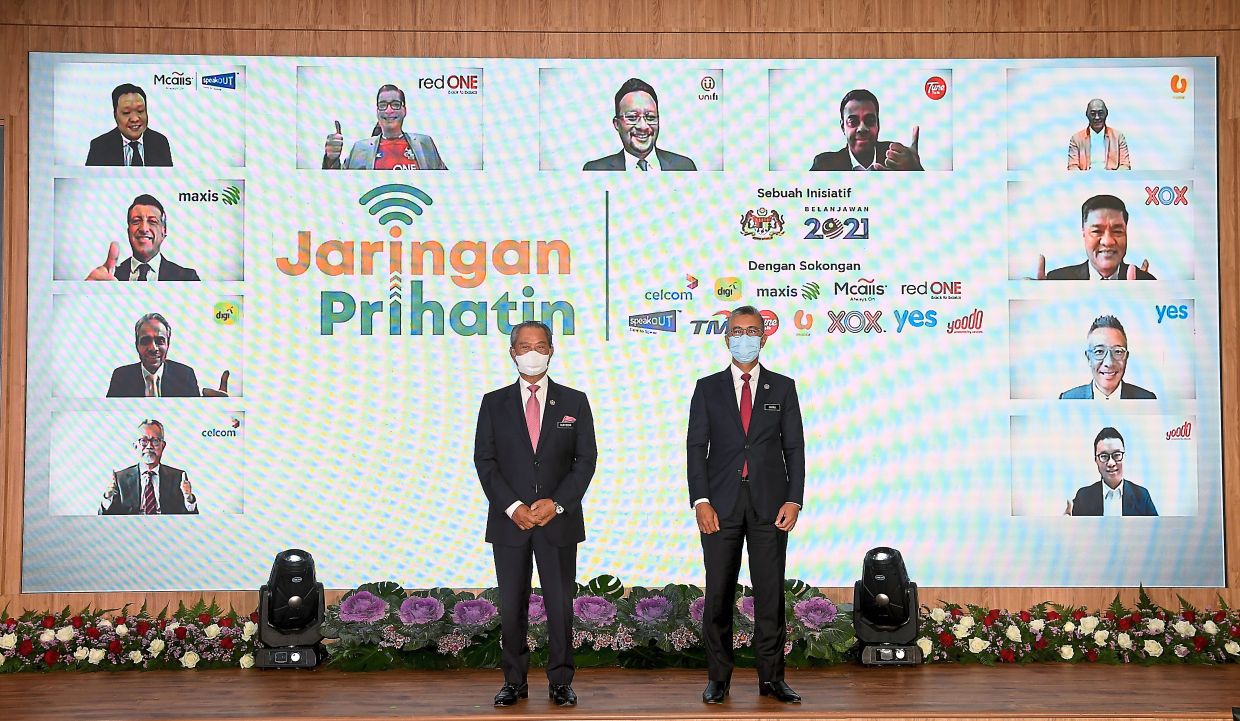 We’re with you: Muhyiddin (left) posing with Tengku Zafrul, with the virtual participation of 11 representatives from local telco operators at the launch of the Jaringan Prihatin programme in Putrajaya. — Bernama

“In order to bridge the digital gap among the community, there is a need to ensure that everyone can get the access at a reasonable cost, and has the skill to make optimal use of the Internet by 2030, ” he said at the virtual launch of the Jaringan Prihatin in Putrajaya yesterday.

Muhyiddin said digital transformation had widened virtual interaction, but the risk of inequality also increased for those not connected digitally.

“The reality is that there are among us those who are isolated and left behind in the digitalisation of our country.

“The rise in Internet usage also showed us it’s time online access be made a necessity like water and electricity for all levels of society.

“Malaysia is committed to ensure connectivity, in line with the minimum 75% as proposed by the United Nations, with broadband cost not more than 2% of the gross national income per capita by 2025, ” said Muhyiddin.

The Prime Minister said to handle the digital gap between the population in the urban and rural areas, a total of RM21bil was allocated in the National Digital Network (Jendela) which included a fibre-optic plan and increasing the quality of 4G coverage by 2022.

The government would also expedite the provision of 5G infrastructure with private investment through Digital Nasional Bhd, estimated at RM15bil, he said.

“God willing, these efforts will help in narrowing the broadband coverage and speed gaps over the next five years, ” he said.

Earlier, in his opening speech, Tengku Zafrul pointed out that a PwC survey showed that 77% of respondents stated that technology offered them more opportunities while 92% said that they were given opportunities by their employers to increase their digital skills outside their normal job scopes.

He also announced the government would implement the payment of the second phase of BPR worth RM2.75bil from tomorrow to targeted groups.

“The Finance Ministry has started to plan for Budget 2022 and study the issues to ensure sustainable and inclusive growth in line with the 12th Malaysia Plan and Shared Prosperity Vision 2030, ” he said.

Beneficiaries of Jaringan Prihatin glad to have more digital access