LABUAN (Bernama): A civil servant pleaded not guilty at the Special Corruption Court here on Wednesday (May 5) to charges of awarding two supply contracts to a company belonging to his wife.

Junaidih Awang, 39, was charged with using his position as finance administrative assistant for gratification by awarding a food and drinks supply contract to Aiza Azha Enterprise, for his office, involving a sum of RM7,209.25 on April 8,2018.

He also allegedly committed another offence of awarding a spare parts supply contract to the same company, for the use of his own office, amounting to RM4,542.50 on April 4,2018, despite having an interest in the company.

The offences were allegedly committed at the Labuan Public Works Department.

The charges were framed under Section 23(1) of the Malaysian Anti-Corruption Commission (MACC) Act 2009 and punishable under Section 24(1) of the same Act which carries a maximum jail term of 20 years and a fine of five times the bribe amount, or RM10,000, whichever is higher, upon conviction.

Abu Bakar also ordered him to report to the Labuan MACC office twice a month and to surrender his passport to the court. 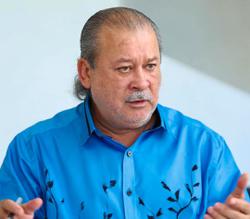