Hundreds of such pictures seemed to have just dropped from the sky, as seen in a video uploaded online.

The photos were believed to have been thrown out of a highrise building in Yichang city.

Passersby picked up the photos and discovered that most of them were of naked women.

Police who are investigating the case have found no leads so far.

The identities of the women in the photos was unknown as well.

Many Internet users speculated that the photos were collateral given to loan sharks, who released the images after the borrowers defaulted on their loans.

The 72-year-old was out for a jog around Clear Water Bay when she saw a car crashing into a police vehicle and a lorry.

“This is Clear Water Bay. A car, believed to have lost control when turning a corner, collided into a police car and a truck.

“For drivers who are intending to pass through Clear Water Bay, be prepared to be stuck in an hour-long traffic jam, ” she said in her livestream report.

Many of the passing drivers recognised the celebrity, so they waved at her and called out her name.

Wang urged road users to avoid the area until the vehicles involved in the accident were removed.

> A policeman in Xi’an, China caused an uproar after he was found to have issued a parking ticket to a man who had died inside his car, China Press reported.

The 38-year-old taxi driver was believed to have stopped outside a restaurant on April 30 to rest but died suddenly in his vehicle.

Video footage showed a police officer placing a ticket on the taxi for errant parking without checking on the unconscious man.

Netizens criticised the police for “caring only about money but not the well being of the people”.

They said the officer should have advised the driver to move his vehicle before issuing a ticket, which would have led him to discover the man’s condition.

Xi’an traffic police said they were probing the case. 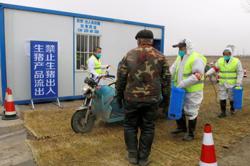