Covid-19: Tightening SOP in Tawau on the cards, says Masidi 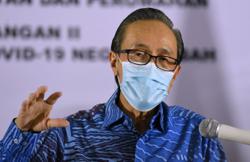 KOTA KINABALU: Tightening standard operating procedures (SOPs) in Sabah's east coast Tawau will be on the cards as the overall state Covid-19 figures dropped to double digits on Monday (May 3).

State Covid-19 spokesman Datuk Seri Masidi Manjun said that 28 of the 57 cases reported in Sabah were in Tawau and neighbouring Kalabakan.

"There is a need for better SOP compliance in the Tawau area," he said, adding that the south-eastern Sabah district that neighbours Indonesia's Kalimanatan remains a concern.

Tawau with two other districts - Lahad Datu and Sandakan - have been under movement control order (MCO) since last month due to rising cases in the districts.

The situation in Tawau over the few weeks where medical authorities remained stretched as they tried to cope with high occupancy at both the district hospital and quarantine centres. Several villages have been put under enhanced MCO.

On Kota Kinabalu recording 14 new cases, Masidi said the situation remains under control but there was a need for more control on social events.

"KK is still under control. The occurring cases come from existing clusters or close contacts. But there is a need for better and tighter control of social events," he said, adding that there were no new clusters detected.

Among the other areas were four cases each detected in Lahad Datu and Kunak in the state's east coast.