Of the 500 individuals, Ismail Sabri said 489 individuals were compounded and 11 were remanded.

Among the violations committed were failure to provide their personal information when entering a premises (215), did not wear face mask (53), did not practise physical distancing (55), entertainment centre activities (77), and others (100).

Ismail Sabri also said the movement control order in Endau and Triang, Mersing in Johor will end on May 3.

"During that MCO period, the Health Ministry had recorded three positive Covid-19 cases from a total of 202 screenings that were conducted in those two localities.

"The Health Ministry also confirmed that the trend of cases has been declining with the clusters being under control. All the positive cases have been isolated and put in quarantine centres, while two cases were recorded on the last day on April 25," he said in a statement on Sunday (May 2).

Ismail Sabri added that the enhanced MCO at the Sekolah Menengah Ugama (SMU) (Arab) Tarbiah Diniah Tahfiz Bunut Sarang Burung, Tumpat, Kelantan that was scheduled to end on May 13, will end much earlier on May 2.

"All the positive cases have been isolated and placed in the quarantine centre," he said.

Ismail Sabri also said 1,095 individuals returned to the country yesterday and have been placed in quarantine stations throughout the country.

"Since July 24, a total of 192,479 individuals returned to the country and were placed in 71 hotels and nine public training institutes as well as private education institutes throughout the country.

Separately, Ismail Sabri noted that 372 foreign workers were screened yesterday for Covid-19 and none tested positive for the virus. 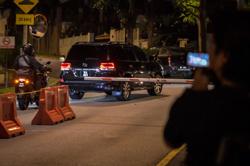