KOTA KINABALU: A political brawl seems to be brewing in the shadows between the two Kadazandusun-based parties in the ruling Gabungan Rakyat Sabah (GRS) coalition.

Parti Bersatu Sabah (PBS) and Sabah STAR are seen as competing with each other as they try to gain stronger ground in the Kadazandusun and Murut areas, triggering perceived manoeuvres of political one-upmanship.

The political cold war is believed to have started when Sabah STAR led by Datuk Seri Dr Jeffrey Kitingan took in PBS strongman Stephen Teo and made him the Sepanggar Sabah STAR division chief.

Though PBS did not directly respond to the pinching of its member, PBS president Datuk Seri Dr Maximus Ongkili and other senior party members have gone on the move across the state to strengthen the party at its division levels.

For many observers, a clear sign of PBS' displeasure was when Ongkili said that Tambunan was the birthplace of PBS and the party will reorganise the three divisions (Tambunan, Bingkor and Liawan) under the Keningau parliamentary constituency.

For many, it was a signal to Jeffrey - who is Tambunan assemblyman and Keningau MP - that PBS could be gunning for the two seats held by former PBS president Tan Sri Joseph Pairin Kitingan, who is Jeffrey's elder brother.

When asked about rising tensions between PBS and Sabah STAR, Jeffrey told reporters on Tuesday (April 27) that it was normal to have different opinions and different priorities among parties in politics.

“But we are in the same federal and state governments so we need to focus on how to work together and to increase our synergy instead of issuing statements on how to divide us.This is my personal view, ” he said.

He said Sabah STAR and PBS belong in the same government and they need to work together.

Jeffrey also did not comment on the Kota Marudu issue. 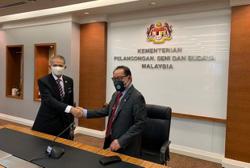