He said Umno leaders also decided that the party will send a letter to the Registrar of Societies (ROS) and the National Security Council to ask for advice and guidelines on conducting the Umno party polls due to be held this year.

“We insist and propose to the government that Parliament and state assemblies convene once again, in line with the statement by Yang di-Pertuan Agong Al-Sultan Abdullah Ri'ayatuddin Al- Mustafa Billah Shah that Parliament should convene during the current state of emergency.

"Parliament and state assemblies are the ‘check and balance’ courts for the people's elected representatives, so that the government does not act as it wants and forgoes the welfare and interests of the people who are facing many difficulties," said Ahmad Maslan.

He said that there must be accountability on spending the people's money and the increase in debts, as well as usage of the Kumpulan Wang Amanah Negara (KWAP).

"The trust of foreign investors will continue to erode if parliamentary democracy is suspended to the extent of losing good governance due to no checks and balances," said Ahmad Maslan in a statement after the Umno supreme council meeting on Sunday (April 25).

He also said the Umno supreme council proposed a special SOP to be formulated to enableParliament and state assemblies to convene.

”This is to ensure that the Umno polls, which will involve divisions and wings, and 3.3 million members will be held effectively and smoothly, taking the Covid-19 pandemic into account," said Ahmad Maslan.

He also said the Umno supreme council agreed that the government should set up an inquiry into the allegations made in the former attorney general Tan Sri Tommy Thomas' memoir "My Story: Justice in the Wilderness" published recently.

"As many police reports were made over Thomas' book, the Umno ministers must push the Perikatan government to form a Royal Commission of Inquiry to investigate the allegations, ” said Ahmad Maslan.

Other supreme council members, however, were present.

Umno’s supreme council meeting was the first after a fiery annual general assembly, which saw the push by Ahmad Zahid to get Umno ministers to leave the Perikatan government.

Umno ministers, however, defied the president’s call and stayed on. 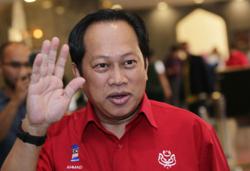