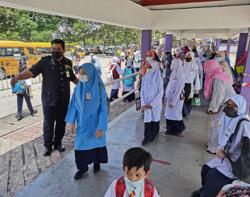 PETALING JAYA: Education stakeholders, though concerned for the health and safety of teachers and students, believe a blanket nationwide closure of schools should only be the last resort.

This is despite the increase in daily new Covid-19 cases and the closure of many schools across the country as positive cases are discovered among its staff and students.

He also said that schools should be allowed to have students return on a rotation basis.

“This would keep the number of students low and maintain physical distance, ” he told The Star.

For example, Goh said students of different levels could take turns coming into school on different days of the week.

“They can do home-based learning (PdPR) on the other days, ” he said.

He added that using the rotation model would also reduce the number of students congregating outside schools.

On April 5, all primary and secondary schools in Sibu district started using a class rotation system to curb the spread of Covid-19.

Goh also said students tend to follow the standard operating procedure closely when they are within the school compound but not outside.

“But it is hard to maintain the SOP when the students are outside waiting for their transport, ” he noted.

Referring to the recent announcement that schools can close for at least two days if even one positive case is detected, Goh said the Education Ministry should not flip-flop on their decisions as it was confusing parents and school heads.

On Wednesday, Deputy Education Minister Datuk Dr Mah Hang Soon was reported to have said that schools could close and this decision would empower school authorities to issue a notice informing parents of the closure once there was a positive case.

A parent, Rodney Teoh, agreed that the rotation model would be the best option right now if the government insists on not closing all schools.

“Otherwise, revert to the PdPR methods, ” he added, referring to online learning and offline methods such as pre-recorded video lessons.

Melaka Action Group for Parents in Education chairman Mak Chee Kin said based on feedback from experts and stakeholders, there were more negative implications than positive ones if all schools had to close again.He also said there needs to be a formal notice issued by the Education Ministry as schools could not order their own closure without a notice from the authorities.

As for schools that are still open even when there are positive cases, she said: “Let parents decide between the risks and benefits of sending their children to schools.”

National Union of the Teaching Profession (NUTP) secretary-general Harry Tan said they did not believe a blanket nationwide school closure was necessary.

“However, the ministry should engage with us (NUTP) and relook at the current SOP together, ” he added.

A source close to the Education Ministry said an official statement on the latest SOP will be issued soon.