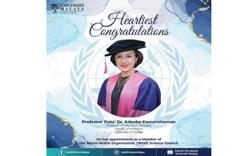 The King also expressed his joy and pride in the appointment as the council is a high-level scientific advisory group comprising world-renowned academics, hence making Malaysia one of the forces to be reckoned with in the global arena.

Sultan Abdullah described Dr Adeeba’s appointment as not only a recognition for her as a high-performance individual but also for Malaysia as a whole.

"It inadvertently proves that Malaysia is capable of producing high quality, credible and world-class experts, ” said His Majesty as stated in a statement posted on Istana Negara’s official Facebook page Wednesday (April 21).

His Majesty also wished all the best to Dr Adeeba and prayed that she would create more excellent success stories and keep the Malaysia flag flying high.

Al-Sultan Abdullah also hoped that the success would inspire all Malaysians to work harder and strive for success in their respective fields.

The WHO Science Council acts as the voice of scientific leadership in giving recommendations and advice on scientific and technological advances that can directly impact global health.

Members of the council comprise internationally renowned experts with excellent track records in their respective fields as well as having a recognised understanding of global health.

She has also been active in leading and organising HIV/AIDS awareness campaign, apart from having founded the Centre of Excellence for Research in AIDS which carried out research in various disciplines of HIV in terms of clinical, public health and related policies.

In 2013 and 2014, she was honoured by being featured in The Lancet and Science journals.

Last year, Dr Adeeba made history as the first Asian to be appointed as President of the International AIDS Society. - Bernama 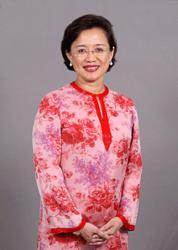