In a statement issued via Istana Negara's Facebook page, the King and Queen also expressed their sadness over the passing and hoped that the family would be patient and resilient in this difficult situation.

Their Majesties also prayed for Abdul Rahman’s soul to be blessed by Allah and placed among the righteous.

Istana Selangor in a posting on the Selangor Royal Office Instagram and Facebook accounts said that Abdul Rahman, 89, died due to old age, at 3.40am on Tuesday.- Bernama 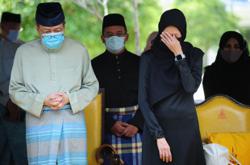