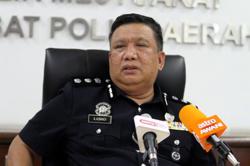 Ipoh OCPD Asst Comm A. Asmadi Abdul Aziz said a 38-year-old delivery rider and 39-year-old restaurant owner were detained and brought back to the Ipoh Central station on Tuesday (April 20) at about 10am after footage of the incident went viral on social media.

ACP Asmadi said the police also seized a machete from the rider's motorcycle.

He said the fight had started after the rider failed to pay for the food he ordered at the restaurant.

"The rider told the restaurant owner that he would return and pay later, but an argument ensued.

"He also provoked the owner and called him out to fight," said ACP Asmadi.

In the one minute, 36 second-long clip, a delivery rider can be heard telling some Ipoh City Council enforcement officers that he had been assaulted.

A man, believed to be a food seller, rushes out from a restaurant and kicks the rider and a tussle ensues.

Several people break up the fight before the man pushes over the rider's motorcycle off-screen, leading to another scuffle.

ACP Asmadi said the restaurant owner's face and leg were injured, and he received treatment at the Raja Permaisuri Bainun Hospital.

"The rider was not injured seriously and declined treatment.

"Both men do not have any prior criminal records and will be remanded until Wednesday (April 21)," he said.

In a statement on Tuesday, ACP Asmadi also said the police are looking for a Twitter user known as "V 3 3 R U @ VEERUUUUUUUU" who tweeted an allegation that the police did not take any action during the fight.

"The user also shared the video of the fight. The two officers in dark uniforms were city council enforcement officers, not policemen.

"A report has been made over the allegation," he said.