PETALING JAYA: Kelantan’s rising Covid-19 clusters emerging from workplaces, especially in the education sector, is the contributing factor in the rapid increase in cases there. 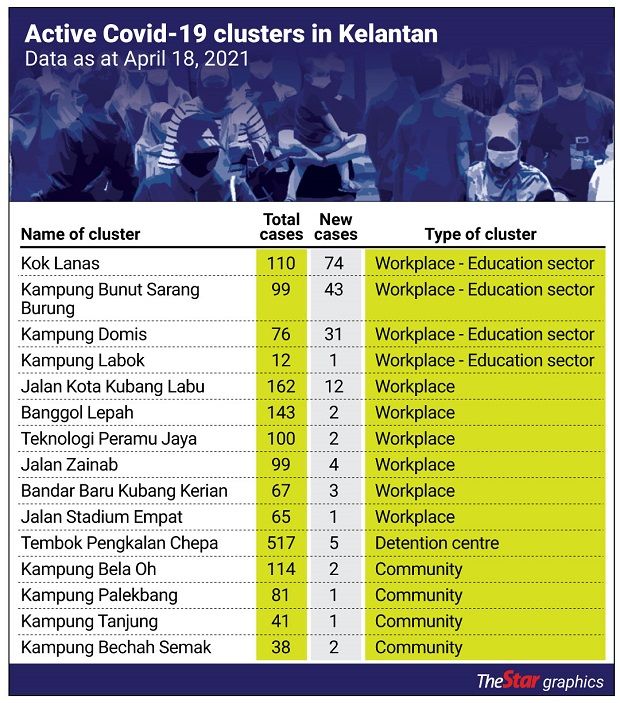 Based on The Star’s analysis, Kelantan has the third lowest vaccination rate compared to other states in the country, with an estimated 1.73% of the state’s population having received the first dose and 1.04% having received their second dose.

In terms of vaccine registration, data from the Special Committee on Covid-19 Vaccine Supply Access Guarantee (JKJAV) showed that participation from Kelantan is the second lowest among other states and federal territories in the country, with only 24.4% of the people in Kelantan having signed up for the vaccine as of yesterday.

The lowest interest is from Sabah, with only 14.60% having signed up.

Seven districts in Kelantan, currently in the red zone based on Covid-19 cases in the past 14 days, have been placed under the movement control order from April 16-29.The seven districts are Kota Baru, Pasir Mas, Pasir Puteh, Bachok, Machang, Tumpat and Tanah Merah.Schools and educational institutions under the seven districts have been ordered to close for a week from Sunday until April 24.

Inter-district travel has also been banned and Ramadan bazaars across the state have been cancelled.Based on the Health Ministry’s data as of April 18, Kelantan has 15 active clusters that make up 23% of the 64 active clusters in the country.

Ten out of the 15 clusters were workplace clusters, which have recorded 933 cases since March 17.

Meanwhile, a total of 517 cases were detected at a detention centre in the Tembok Pengkalan Chepa cluster while 274 cases were recorded from four community clusters.

The number of Covid-19 cases in the state was highest in January but reduced significantly in the following months during the MCO period.

However, figures rose again at the end of March as most movement restrictions were lifted.

As of April 18, Kelantan recorded 1,897 Covid-19 cases throughout a 14-day period, with Kota Baru contributing the highest figure at 789, followed by Tumpat with 329 cases and Pasir Mas at 310 cases.