JOHOR BARU: An elderly couple trapped in their home in Skudai due to flash floods was rescued by the Fire and Rescue Department and taken to a flood relief centre.

Skudai Fire and Rescue Department operations commander Mohd Riduan Akhyar said they received an emergency call at 4.36pm on Saturday about the couple.

“Floodwaters rose after continuous rain since noon that day, trapping the 80-year-old man and his wife, 70, in their house at Kampung Laut Batu 9 1/2.

“We sent 14 personnel to the scene to rescue the couple using a boat and brought them to the Kampung Melayu Batu 10 flood relief centre, ” he said.

Meanwhile in Jalan Sentral 24, Taman Nusa Sentral, three men were also trapped when their vehicles were caught in floodwaters at around 2pm on Saturday. 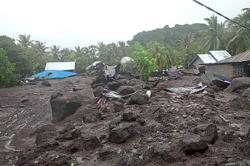