JOHOR BAHRU (Bernama): Police have arrested a senior citizen in connection with the assault of a motorist who was blamed for causing an accident in Jalan Taman Cendana-Masai, Pasir Gudang here two days ago.

Seri Alam district police chief Supt Mohd Sohaimi Ishak said the 61-year-old man was picked up at his home in the city on Friday (April 16) night.

"The elderly man has been remanded for six days beginning Saturday (April 17), and police are still tracing three more individuals in connection with the case,” he told reporters after the Infaq Ramadan programme in Taman Molek here today.

Two days ago, a video went viral on social media showing the 18-year-old driver of a Proton Wira being beaten up by several road users who apparently held him responsible for an accident involving a Honda EX5 ridden by a woman at the traffic light intersection.

The 38-year-old woman sustained multiple injuries to her head, legs and hands. 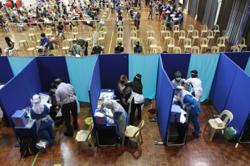