PETALING JAYA: The Malaysian Bar has initiated legal action to sue parts of the Emergency Ordinance to be declared unlawful.

"The Emergency Ordinances have resulted in more powers being conferred on the Executive, while constitutional safeguards such as Parliamentary scrutiny and accountability, have been reduced.

"It is important that under all circumstances, the rakyat is not deprived of the fundamental protections and procedural safeguards enshrined in our Federal Constitution," said its president A.G. Kalidass in a statement on Friday (April 16).

He said that Section 4 and 24 of the Emergency Ordinance No 2 which pertails fake news and defence statements, among others, are unconstitutional.

He also said that the Bar wants to declare Sections 5,11(a) and (b), 14,15 and 18 of Emergency Ordinance No 1, which encompasses compensation for assets, executive and legislative power, Parliament and state legislative sittings, to also be declared unconstitutional.

"The Malaysian Bar has commenced this legal action in furtherance of its statutory duty to uphold the cause of justice and pursuant to the resolution adopted by the Malaysian Bar at its 75th Annual General Meeting held on 13 March 2021," he said. 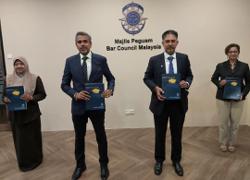