MERSING: Two fishing vessels with 800kg of fresh catch were detained by the Johor Fisheries Department for illegal fishing.

Department director Noraishah Hashim said the vessels were spotted by its patrol unit at 9.3 nautical miles off Pulau Aur, near here, at around 9pm on Tuesday (April 13).

“The crews were found to have violated their fishing licence by fishing out of their permitted zone.

“We arrested seven crewmen, including three foreigners from both vessels, and also seized their fishing equipment and an array of fresh catch such as ikan selar kuning, ikan gelama, mackerel, squid and stingray, ” she said.

She added that the case is being investigated under Section 8(b) of the Fisheries Act 1985, which carries a compound and revocation of licence, upon conviction.

She urged fishermen to adhere to the terms as stated in their fishing licence at all times.

“This is to help increase the population of freshwater prawns and add to the vibrancy of the aquatic resources in the area.

“We also hope that this effort can add to the livelihood of the local fishermen and benefit the community as well, ” she added.

She reminded the fishing community to refrain from breeding or releasing prohibited fish species such as African catfish and "ikan baung sirip ekor merah" into the waters as the predatory fishes could affect the country’s natural resources. 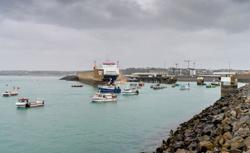