"But I will not aim for any front-line leadership position," he said in a statement released on Thursday (April 15).

Lim, 80, is one of the most senior MPs in the country since he started contesting in 1969.

The DAP adviser and Iskandar Puteri MP said he is even prepared to lose in the party election.

"We stand for the very opposite as we want Malaysians to accept that we have multiple identities – ethnic, religious, linguistic, cultural, regional – but first and foremost that we are all Malaysians," he explained.

Lim's remarks came after the party's Sungai Pelek assemblyman Ronnie Liu sparked criticism among his fellow party leaders in Selangor when he allegedly said that DAP needed to maintain its "Chineseness" in his speech during a book launch.

Liu, who is the party's central executive committee member, later claimed he was misquoted.

In his statement, Lim also noted that there were plenty of lessons that could be learnt of the 22-month of the Pakatan Harapan government, adding that the hopes to restore Malaysia as a "world-class" nation had not been fulfilled.

"This is because the Pakatan government did not have five years to fulfil its election pledges," he said. 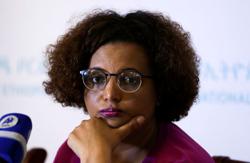