She was 71 and leaves behind her husband, five children and one grandchild.

Norkiah passed away at around noon and will be laid to rest at the Samariang Muslim cemetery at 5pm on Wednesday.

Norkiah was active in charitable work, including the welfare of orphans and children's education.

A children's home at Jalan Kuching-Serian here was named after her in 2016.

State Welfare, Community Wellbeing, Women, Family and Childhood Development Minister Datuk Seri Fatimah Abdullah said Norkiah had shown love, care and concern for the wellbeing of the children in welfare institutions, who would greatly miss her.

"During the Ramadan month, she would bring them out to buy new clothes and shoes for Hari Raya. Similarly, the poor and needy will also miss her," she said.

Fatimah recalled that Norkiah's last phone call to her was about asking the Welfare Department to help find a place to stay for a senior citizen who had no family members.

"I will also miss our discussions on the Women's Institute, which was another area that was close to her heart. We will all miss her," she added. 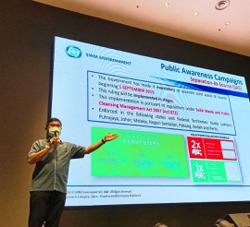 Khairy: 2,800 vaccinations at WTCKL on May 15,16 to be rescheduled over congestion concerns
Dr M warns Covid-19 situation could worsen, urges public to be disciplined
Melaka police still investigating Awie over alleged Covid-19 SOP violation, no fine issued yet
Miti: Travel permission letter is for work only, abuse it and risk prosecution
Eight Abu Sayyaf members and their families rounded up in raid on mangrove swamp in Sabah's Beaufort district
Only Miti approval letter and either employers' letter or workers' tag needed to travel for work, says Miti
Pakatan's Selangor lawmakers call out Education Ministry over lack of action on Ain Husniza's claims
MyKad applications for 12-year-olds can now be made online
Penang allows terawih, Aidilfitri prayers in MCO, CMCO areas
Vaccination 'walk-ins' actually to prevent wastage because of no-shows, says Sabah minister