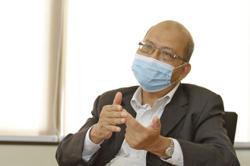 GEORGE TOWN: The first dredger carrying sand to reclaim land in the south of Penang island will arrive by late May or early June, with reclamation works to begin as soon as the final details of the Environmental Management Plan are approved, says Deputy Penang Chief Minister I Datuk Ahmad Zakiyuddin Abdul Rahman.

First unveiled in 2015, the privately-funded project had been delayed for nearly two years since the 2019 approval of the Environmental Impact Assessment that came with 72 conditions for the state and the project delivery partner to fulfill.

“Starting with Island A (930ha), Phase 1 of the project will see 485ha reclaimed first.

“Work on that phase is expected to be completed between 2026 and 2027, while reclamation of the entire island will take about nine years, ” he said after leading the media on a tour of the sea area designated as the future reclamation site.

“Island A will be about 250m from Penang island’s shoreline at Permatang Damar Laut, ” he said, adding that the reclamation would start from Island A’s eastern tip, about 600m from Pulau Rimau.

Island A’s southern tip will be about 4km from Permatang Damar Laut’s shoreline when completed.

Chief Minister Chow Kon Yeow described Island A as “a continuation and expansion of the Bayan Lepas Free Industrial Zone”.

The state government’s hopes of getting Federal-backed funding for the project ended with the fall of the Pakatan Harapan at the federal level last year.

Last month, Chow announced that the reclamation of Island A will then become a public-private joint venture with SRS Consortium Sdn Bhd.

On March 25, Gamuda said it was finalising details with several banks to finance the first phase of Island A, estimated to cost between RM6bil and RM7bil.

SRS Consortium will raise the funding needed for the reclamation of Island A and hold 70% of the joint venture, while the state-owned Penang Infrastructure Corp Sdn Bhd holds the other 30%.

As project owner, the state government will give full exclusive development rights of Island A to the joint venture firm.

The entire Penang South Reclamation (PSR) project aims to create three islands with a combined acreage of 1,800ha, or equal to the size of 3,600 football fields.

The state government has proposed to implement PSR to raise funds for the RM46bil Penang Transport Master Plan, which also has SRS Consortium as the project delivery partner.