KLUANG: The Covid-19 pandemic has made it difficult for Wisma Putra to send Malaysian ambassadors for their overseas attachment, even in Singapore, which has seen the High Commissioner position vacant for a year now, says Foreign Minister Datuk Seri Hishammuddin Hussein.

“There are still technical issues to be handled,” he said after officiating the Malaysia Prihatin Parliament Sembrong programme in Paloh here yesterday.

“Wisma Putra is addressing the many vacancies for posting such as ambassadors or high commissioners, but the task has been made difficult by the pandemic.”

But he stressed that despite the fact that there is no High Commissioner to Singapore yet, the relationship between Malaysia and the island republic was still normal.

“In fact, Prime Minister Tan Sri Muhyiddin Yassin will be visiting Singapore to meet his counterpart Lee Hsien Loong on May 4, ” he said, adding that talks will include the reopening of the Malaysia-Singapore border.

“The discussion is still ongoing, where during Singapore Foreign Minister Dr Vivian Balakrishnan’s recent visit to our country, I have raised the matter with him.”

Hishammuddin, who is also the Sembrong Umno division chief, urged for an immediate end to efforts to create camps among party leaders.

Hishammuddin said efforts should be focused on strengthening Umno after its recent general assembly.

“For the past three years, certain quarters have thrown many accusations against me, saying I will leave Umno, but I am still loyal to the party.

“What is Umno 3.0? I urge everyone to stop pitting one against another as there are many important things in our agenda, ” he said, adding that the party’s stability should be the main priority.

Hishammuddin also said that the Umno supreme council would hold a meeting soon to discuss party elections and the resignation of Umno ministers in the Federal Government.

“The matter is very simple. I'm loyal to the party. If the supreme council decides that we should resign, then I will do so. The matter should be decided by the council, not by certain individuals within the party,” he said. 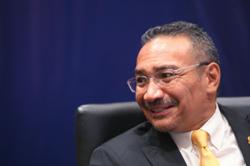