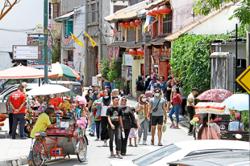 MELAKA: The Melaka government wants more fact-finding by the state Tourism Promotion Board before it allows Jalan Tokong (Harmony Street) and Pulau Besar here to be made part of a spiritual tourism package.

Chief Minister Datuk Seri Sulaiman Md Al said he needed more insight on the proposal to promote these sites as part of the new attraction.

“We (state officials) need more explanation on the spiritual tours, ” he said on Tuesday (April 13).

On Sunday (April 11), Melaka tourism, heritage and culture committee chairman Datuk Muhammad Jailani Khamis announced that there was a proposal to incorporate Jalan Tokong and Pulau Besar into the state’s spiritual tourism sub-sector.

Harmony Street or Jalan Tokong reflects religious harmony since the days of the Melaka Sultanate where three different places of worship have coexisted for centuries: the Kampung Kling Mosque, Sri Poyatha Moorthi Hindu temple and the Cheng Hoon Teng Temple.

Pulau Besar is known as the place where Islam spread during the early days of the Melaka Sultanate.

Malaysian Association of Tour and Travel Agents (MATTA) MelakaChapter chairman Goh Hock Gin said it is a way for the state to elicit interest among international visitors.

“There is a lot of potential to attract tourists to Melaka especially with a growing number of people looking to find inner peace and happiness," he said on Sunday.

Goh said Melaka would become a spiritual tourism destination with the right amount of promotion.

“Not many foreigners would be aware that the state has such old mosques, churches and temples," he said.

For instance, Goh said he had organised a Buddhist Conference in 2005 that attracted participants from all over the globe.

Goh said Buddhists are fond of visiting India and Nepal as part of their spiritual tours but Melaka could also become one of their destinations with the right publicity.

He said the effort to develop spiritual tourism should be done in tandem with related activities.

“If we look at trends in the sector, groups from Australia, Japan and Europe are likely to go to Indonesia or India for yoga or meditation.

“We can also engage locals with expertise to do the same here as well as identify eateries that offer vegetarian meals," he said.

Samford said spiritual tourists are more educated, and would have a positive impact on the local tourism industry.