KUALA LUMPUR: Former spy chief Datuk Hasanah Abdul Hamid has been given a discharge not amounting to an acquittal (DNAA) by the High Court here in a criminal breach of trust case involving RM50.4mil in government funds after the prosecution withdrew its case against her.

Justice Ahmad Shahrir Mohd Salleh said the prosecution had made an application not to further prosecute the accused and explained a new development that it discovered.

He noted that pursuant to Article 145(3) of the Federal Constitution, the Attorney General (AG) has the power to institute, conduct or discontinue any proceedings for an offence and this power was exercisable at the AG’s discretion.

This position is further reinforced under Section 376(1) of the Criminal Procedure Code that stated the AG has the control and direction of all criminal proceedings, he said.

Justice Ahmad Shahrir added that the court could not compel the prosecution to proceed with the case against the accused if it decided to withdraw.

“In the circumstances, I find the prosecution has provided good and valid grounds in exercising his powers under the law to not further prosecute the accused.

"I also find that the new development as explained by the learned Deputy Public Prosecutor is a temporary impediment because the learned DPP confirms that the accused will be made to face the charge in the future.

“Therefore, I hereby order the accused to be given a DNAA, ” he said on Monday (April 12).

The judge ordered all exhibits produced and tendered before the court to be returned to the prosecution.

Hasanah, the former director-general of the Malaysian External Intelligence Organisation, pleaded not guilty to CBT involving US$12.1mil (RM50.4mil) belonging to the Malaysian government at the Sessions Court on Oct 25,2018.

She was alleged to have committed the offence in her capacity as a civil servant at the office of the director-general of the Research Division of the Prime Minister’s Department in Putrajaya between April 30 and May 9 that year.

The charge was framed under Section 409 of the Penal Code which provides for imprisonment of up to 20 years, whipping, and a fine upon conviction.

The case was transferred to the High Court and the prosecution’s trial began on Oct 6 last year.

The trial took a break after a two-day hearing and resumed this year on April 5.

A total of 10 witnesses testified over the span of a 10-day hearing. 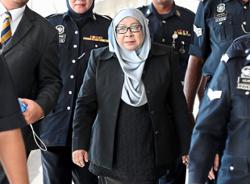