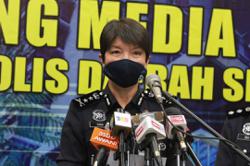 According to sources, police at the scene had asked the suspects to get out of the four-wheel-drive vehicle they were sitting in, as they had received information of a car theft earlier.

“However, instead of getting out of the parked car, the driver drove straight into our personnel in a bid to escape. Policemen had to fire at the vehicle in self-defence,” he said, adding that the subjects managed to speed off, leading to a chase.

Policemen later found the vehicle abandoned by the roadside several kilometres away, with no signs of the suspects nearby.

There were also no traces of blood in the vehicle, which means that the suspects were probably not hurt and that the shots fired did not hit them.

When contacted, Sabah Police Commissioner Datuk Hazani Ghazali said they were on the hunt for the two suspects.