Hot favourite: Mi loka (centre) is a sweet porridge that is popular among the Adat Perpatih community. — Bernama

KUALA PILAH: Mi loka may not be familiar to many but the traditional Negri Sembilan dessert is a perennial favourite among the Adat Pepatih community, especially during Ramadan.

Mi loka is a type of Malay sweet porridge that is mixed with a type of noodle known as “mi siput”.

“Mi loka is a highly favoured dish here, especially among the elderly, as it is very easy to prepare. All you need is gula enau (palm sugar), sugar, pisang nangka, pandan leaves and coconut milk.

“It can also be eaten with bread or pulut (steamed glutinous rice), ”

Nazariah said mi loka was also among the desserts that were much sought-after during Ramadan as it could only be found in certain areas.

In fact, she said these days the Negri Sembilan heritage dish could hardly be found in restaurants or food markets, making it less popular among the people, especially youngsters.

Nazariah, who acquired the skill of making mi loka from her mother, said she hoped that the younger generation would learn to cook the dish to ensure it did not go “extinct”.

Another sought-after traditional Adat Lingkungan dessert during the fasting month is kuih sopang, which is made of glutinous rice flour, coconut milk, gula enau and freshly grated coconut.

“They are actually different, badak berendam is round in shape while kuih sopang is shaped like a curry puff.

“Kuih sopang is also served with thick coconut milk gravy and only takes an hour to cook, ” she said. 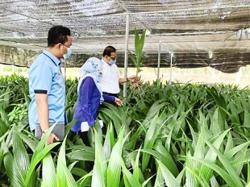