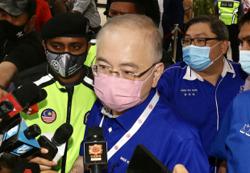 "We have to look at the overall ecosystem. Some say loud exhausts should be banned, but it may not come under the Transport Ministry’s jurisdiction as it may involve the Customs Department and such, ” said Dr Wee.

The Transport Minister acknowledged that questions were raised on social media over the sale of modified motorcycle exhausts recently, with accusations levelled at several ministries.

“I have read a lot of comments on Facebook. This does not only involve the Transport Ministry, but other bodies as well, ” he said.

Speaking to the media after launching the Diesel Multiple Unit Train (DMU) at the Pasir Mas railway station in Kelantan on Sunday (April 11), Dr Wee said that some questioned how such exhausts can enter the market.

“Some accused the Domestic Trade and Consumer Affairs Ministry of not protecting consumers from buying prohibited items, ” added Dr Wee.

As such, Dr Wee suggested a collective effort by the relevant ministries to find the best way to tackle the issue.

"We don’t want to trouble people but there are complaints that the sound of loud exhausts are resulting in others being unable to sleep, ” he added.

Dr Wee said that the Road Transport Department was currently only taking an advocacy approach in the matter with regard to motorcyclists who have modified their exhausts.

On March 28, Dr Wee said that motorcyclists with loud exhausts would be called up for interview by the JPJ instead of issued with summonses under Notice 114 of the Road Transport Act.

Motorcyclists who are guilty of illegally modifying their motorcycle exhaust can face a fine of up to RM2,000, or six months’ jail.

The police are also empowered under Section 64 of the Road Transport Act 1987, to seize motorcycles to prevent a repeat of the similar offence.