KOTA KINABALU: For a former radio broadcaster who got to cover Prince Philip up close, it was a nerve-racking experience.

“I was a nervous wreck when Prince Philip, Queen Elizabeth II and Princess Anne arrived at the port in Kota Kinabalu in February 1972, ” said Datuk Gan Poh Tiau, 71, who was then with Radio Sabah.

They had just disembarked from the vessel and had a meet-and-greet session with dignitaries, he said.

“I was there doing a live commentary. I was focusing so hard on speaking correct Bahasa Malaysia and saying the right things during that brief moment they were there.”

Unfortunately, he cannot recount much more about the experience.

“It is too bad that I can’t really remember much about that visit because it was brief.

“I was too nervous and focused on my live radio commenting, ” added Gan.

Writer Meng Yew Choong recalled meeting Prince Philip in Singapore when he was working there as a journalist in 2006.

The royal couple was on a state visit to Singapore from March 16 to 18 after leaving Australia days earlier for the opening of the Commonwealth Games in Melbourne.

“I was among hundreds of people at an event I was sent to cover, attended only by Prince Philip, as Queen Elizabeth II had her own separate programme.

“I was among just a small crowd when Prince Philip was introduced to a group of us, and I remember introducing myself (or being introduced, I can’t recall) as a journalist.

“It was a fleeting encounter, probably lasting no more than five seconds.

“I remember receiving one of the firmest handshakes ever, with Prince Philip’s palm far larger than mine, ” he said. 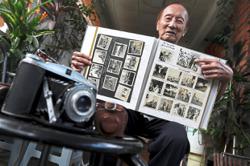