IPOH: A 41-year-old businessman was found guilty of 109 charges of cheating and falsifying documents and sentenced to 10 years’ jail and 24 strokes of the cane.

Sessions Court judge Norashima Khalid meted out the punishment to N. Narendran (pic) for cheating one Hafizul Abdul Hamid, 45, of more than RM6.3mil in a fake scheme.

Narendran committed the offence between May and December 2015 when he led Hafizul to believe that there was a deal with Hospital Raja Permaisuri Bainun involving disposable medical equipment.

Narendran persuaded the victim to hand over cash and cheques of between RM20,000 and RM350,000 as investments.

In 2016, Narendran pleaded not guilty to all charges under Sections 471 and 420 of the Penal Code.

After the proceedings, Narendran’s lawyer RSN Rayer said his client would be filing an appeal at the Ipoh High Court.

Earlier in court, Rayer had asked the court for lower bail as his client needed to care for his family.

“My client has previously paid RM55,000 bail and has never failed to attend court, ” he said, before asking the court to allow his client to pay the bail by Monday.

Judge Norashima set bail at RM30,000 to be paid by yesterday. 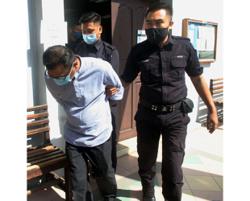