IPOH: A Raja Permaisuri Bainun Hospital obstetrician and gynaecologist testifying in the rape trial of former Perak executive council member Paul Yong told the High Court on Wednesday (April 7) that her examination of the victim revealed there were fresh tears in the hymen.

Dr Nilawati Isha, a specialist, said her examination conducted on July 9,2019, also revealed a fresh abrasion to the victim’s posterior fourchette caused by the possibility of penetration by a blunt object or organ.

She said based on the medical examination there were two fresh tears, besides an old tear in the victim's hymen.

Dr Nilawati explained that a fresh abrasion in the hymen was a tear that occurred within 72 hours of the examination.

On a question by Deputy Public Prosecutor Liyana Zawani Mohd Radzi, that for a fresh tear in the hymen or abrasion by a blunt object or organ, what sort of effects were required, Dr Nilawati said, “This could happen due to consensual sexual intercourse, or sex by force.

“For the effects to happen, it could be the first time an object or organ is inserted, or due to multiple times, ” she said during the hearing before Judge Datuk Abdul Wahab Mohamed.

The gynaecologist was testifying against Yong who is charged with allegedly raping his Indonesian maid in a room on the top floor of his house in Meru Desa Park on July 7,2019, between 8.15pm and 9.15pm.

Dr Nilawati also agreed there was a possibility to find abrasions and tears if penetration is done in a short time by force, or due to consensual sex carried out violently, and it could happen within a minute as well.

Explaining why she put in the medical report diagnosis of the victim as “Rape with fresh hymenal tear”, whereas in the preliminary report she stated as “findings consistent with sexual assault”, Dr Nilawati said sexual assault consists of rape, as well as molest.

During cross examination, Yong’s counsel Salim Bashir asked if it was possible to have red marks due venereal disease (sexually transmitted disease).

Dr Nilawati agreed there is a possibility, but there would not be tears due to such disease, and in this case the marks were on the tears and not at the other areas of the private parts.

Salim asked if she agreed that the victim’s menstruation had stopped two months before the examination, and that there was a possibility the victim was pregnant.

“During examination, she told me that her periods had stopped for two months, ” she added

DPP Liyana, after the cross examination, asked Dr Nilawati on why she did not check if the victim was pregnant or otherwise.

“At that point of time, I only examined her private parts, and there were no signs to show whether she was pregnant or not, ” she added.

On the lawyer suggesting that the red marks could possibly be due to venereal disease, Liyana asked the specialist if indeed the victim had such a disease, to which she replied, “From the examinations I carried out on her private parts, I did not find any trace of such disease, ” she added. 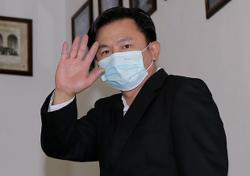