The senior lawyer had described High Court judge Justice Mohd Nazlan Mohd Ghazali who convicted his client Datuk Seri Najib Razak as "hopelessly incompetent" and that the trial judge had "poisoned" his own grounds of judgment by adding elements that were previously not there in his decision.

Justice Abdul Karim Abdul Jalil, who chairs a three-man bench, stopped Muhammad Shafee when he was giving his submission.

"Find a better adjective to describe him. Give respect to the judge. Use words like 'grossly erred', 'he had misdirected himself'... not just to say he is 'hopelessly incompetent'," Justice Abdul Karim said here on Tuesday (April 6).

Muhammad Shafee then asked if he could say that the trial judge had "demonstrated incompetence", to which Justice Abdul Karim said yes.

The lawyer then told the judge that he "could not pull punches".

Justice Abdul Karim said he could still do so, but respectfully.

"... with a bit more decorum... All right," Muhammad Shafee responded.

Earlier, Muhammad Shafee submitted to the court that his client did not get a fair trial in the case.

He said the trial judge had incorporated additional elements in his grounds of judgment and record of proceedings and questioned whether the judge had poisoned his own judgment by doing so.

"Has the poison occurred to his grounds of judgment that the Court of Appeal would now have to relook into the grounds, fresh?" Muhammad Shafee said.

At the beginning of the appeal on Monday (April 5), Muhammad Shafee submitted that Justice Mohd Nazlan had stated that the prosecution had established a prima facie case in his oral grounds.

However, in his written judgment after convicting Najib, the judge had included additional reasons why his client was asked to enter his defence, Muhammad Shafee said.

The lawyer said it was prejudicial to the accused and a serious misdirection by the judge.

The former premier's defence team had submitted 307 grounds on why he should be cleared of the charges in his petition of appeal.

Najib was also sentenced to 12 years' prison and handed a RM210mil fine, in default five years' jail, in the case of abuse of position.

Other judges on the bench are Justices Has Zanah Mehat and Vazeer Alam Mydin Meera. 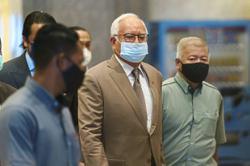