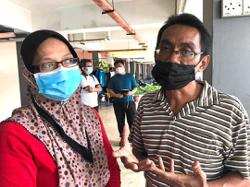 IPOH: Lorry drivers who were blacklisted after being forced to carry excess loads by their employers should be given a second chance by the government, says a social welfare non-governmental organisation.

Pertubuhan Insan Peka Malaysia chairman Balachandran Gopal said the government could allow the drivers to get their driving licence back and give them a one-year trial period as a short-term plan.

"This is to allow them to continue earning a living and also to pay off their summonses. It is only when they work that they are able to pay. Most drivers I've met are willing to pay," he said when contacted.

"And also perhaps, the enforcement agencies could also give them a 50% discount for their compounds," he said, adding that he was assisting about 100 drivers here who were affected by the issue.

Balachandran said that in the long-term, he hoped any summonses related to overloading would be borne by the employers.

Transport Minister Datuk Seri Dr Wee Ka Siong had reportedly said there were weaknesses in the Road Transport Act that enable unscrupulous freight companies to take advantage of their drivers.

This was following a meeting with lorry driver S. Arumugam whose driving licence had been blacklisted after his employer refused to settle the summonses for carrying excess loads.

Dr Wee had said that the Road Transport Department (JPJ) and the Land Public Transport Agency (Apad) would discuss and find a resolution to the issue.

The JPJ - which enforces the Land Public Transport Act 2010 - has also been ordered by Dr Wee to review the summonses and draft a new standard operating procedure for enforcement on lorries carrying excess loads.

Balachandran said the driving licence was important for the drivers.

"Even if they are not driving lorries, they can also do other things like being a taxi driver or doing food delivery.

"There are some whose family members have health issues and without the licence, it is an inconvenience as they are not able to drive them to hospitals," he said, adding that the demerit system should also be abolished.

"I will gather all the information related to the drivers' family issues, summonses and pass them to the Transport Ministry. I think there are more drivers with the same problem all over the country," he said. 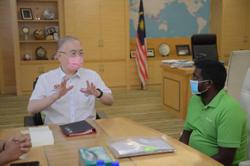