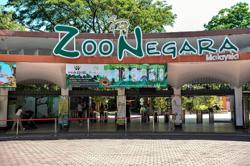 PETALING JAYA: After a visitor’s photos of “skinny” animals and poor living conditions went viral online, Zoo Negara has come out to deny that its animals were malnourished and neglected.

While acknowledging the zoo’s shortcomings and lack of funds, its deputy president Rosly@Rahmat Amat Lana assured Malaysians that the animals were being well fed and receiving veterinary care to the best of the zoo’s ability.

This came after photos of animals at the zoo, including one of an emaciated Malayan tiger walking around in its enclosure, were uploaded to social media on Wednesday by Facebook user Kinz Lai after his recent visit there.

Rosly explained that the tiger in question was recovering after receiving medical treatment.

“That particular tiger was recovering from medical treatment. Hence, it was given the opportunity to walk around its enclosure as part of its recovery process.

“It is unfair for the netizens to single out one tiger among the many big healthy cats of Zoo Negara.

“Rest assured that we are feeding our animals well and are giving them the best veterinary care to the best of our ability, ” said Rosly.

He added that they were grateful to survive the movement control order with the help of kind Malaysians, allowing the zoo to channel the funds into feeding the animals, basic veterinary care and paying staff salary.

However, with the zoo having to spend all of its revenue, Rosly admitted that it was left with no room for expansion as a facility for education, conservation and scientific research.

“Zoo Negara needs at least 500,000 visitors annually to break even from ticket sales, ” he said.

Lai, who posted over 40 photos from his recent visit to the zoo, wrote that most sections in the zoo were dirty while the animals seemed skinny and had no access to clean water.

In the post that has gathered over 4,000 likes and has been shared over 9,000 times, Lai ended it by calling on the public to visit Zoo Negara or make a donation to it.