PETALING JAYA: Cooperation between Parti Pribumi Bersatu Malaysia and PAS appears to have gone up a notch after Bersatu appointed 12 representatives to a joint consultative committee to prepare for GE15.

Bernama reported on Sunday (April 4) that the announcement was made by Bersatu secretary-general Datuk Seri Hamzah Zainuddin.

He was also reported as saying that Bersatu would continue to strengthen cooperation between Perikatan Nasional component members such as PAS, Sabah Star, Sabah Progressive Party (SAPP) and Parti Gerakan Malaysia.

Hamzah said the appointment of the 12 representatives in the joint consultative committee led by Tan Sri Muhyiddin Yassin was decided by a Bersatu's supreme council meeting on Saturday (April 3).

He said Bersatu acknowledged the role and involvement of youths in politics and community activities.

Non-bumiputras can join Bersatu as associate members although they are not eligible to vote and contest in party elections. 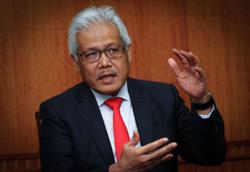