Men at work: Construction workers carrying out upgrading work at Masjid Putra in Putrajaya. Industry players say employers are finding it hard to comply to the deadline for screening due to cost, appointment scheduling and logistics. — YAP CHEE HONG/The Star

GEORGE TOWN: Small enterprises are struggling to send their foreign workers for Covid-19 screening, and are pushing for other preventive measures against the virus to be put in place.

Federation of Malaysian Manufacturers (FMM) Penang chairman Datuk Jimmy Ong said many employers found it hard to comply with the deadline for screening due to cost, appointment scheduling, and logistics.

“Perhaps the authorities should look into more efficient methods. We now have saliva test kits in the market which are cheaper and can be done at home.

“There is no need for invasive swabs or visits to an in-person test site, ” said Ong yesterday.

He added that it is important to find a way for more regular testing of factory workers, as they can still be infected after the initial mandatory screening.

“Unfortunately, conducting frequent tests on employees by the thousands in large corporations would mean a huge sum of money. Social Security Organisation (Socso) only subsidises the first test.

“It costs between RM80 and RM120 for each test while the more accurate method using reverse transcription polymerase chain reaction will cost almost RM200, ” he said, adding that Socso should look into providing assistance for subsequent tests using saliva test kits.

He also agreed that some employers are still struggling with logistics issues due to the long list of employers trying to get their workers tested.

“Most did try to meet the deadline, and those that didn’t are likely to lay low and stay silent, ” he said, adding that the deadline should be extended to allow such employers to comply.

Property developer EcoWorld took preventive measures at its workers’ quarters, and have had zero cases so far, according to its northern region general manager Chan Soo How.

“Canteens, bathing areas and common areas were expanded and their layouts revamped for those staying there to have sufficient physical distancing.

“Testers were called in to the sites and only workers who tested negative were allowed to resume work. Luckily, everyone cleared the test, ” said Chan, adding that tests were being done on a regular basis.

Meanwhile, Penang Chief Minister Chow Kon Yeow said 47 factories in the state have been ordered to close so far this year due to positive cases.

“We urge for additional initiatives, considering that existing approaches have not curbed the rate of infection in the (industrial) sector.“A total of 11 active clusters were reported by the Penang Health Department as of March 31 and seven of the clusters involved factories, one in a construction site, one in a detention depot and two in the education sector.

“The state special security committee has emphasised on the need for the ‘Safe@Work’ programme proposed by the Ministry of International Trade and Industry (Miti) to look into the needs of operators from small and medium enterprises, ” he said.

“Although the Miti representative at the meeting could not give any final word on the call, they gave assurance that the ‘Safe@Work’ programme will be fully strengthened in the state, ” he added.

Chow said the Penang Health Department has screened 97,306 non-citizens in the state, the second-highest rate in the country after Sabah. 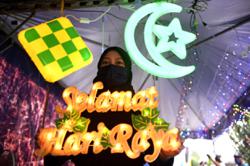