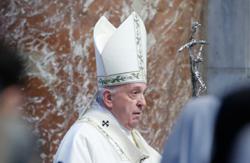 Straight from the oven: Jones showing a tray of packed hot cross buns ready for collection.

The spiced buns topped with light-coloured crosses are traditionally made around Good Friday with each element of the bun – the dough, spice and cross – symbolising parts of Jesus Christ’s crucifixion and death.

Yvette Claudine Jones has been baking for over 30 years but only tried her hand making hot cross buns this year.

Having moved back to Malaysia after living for over two decades in Brunei, Jones said her hot cross buns were inspired by a tradition practised by the Church of Our Lady of the Assumption in Bandar Seri Begawan.

“On Holy Thursdays, some parishioners would sell hot cross buns before mass.

“These buns were then blessed by the priest and were used by parishioners as a means of fasting where we would consume only these buns throughout Good Friday right up to the vigil of Easter on Saturday.

“The sense of community was amazing during this period as the whole congregation would fast throughout the Easter Triduum, ” Jones said, referring to the holy three-day celebration for Christians.

After returning to the country, the mother-of-two ran a bakery stall in an office building cafeteria in Kuala Lumpur before converting to a home-based operation in Rawang a little over a year ago.

“I’ve only started baking my own hot cross buns this year and by God’s grace, it has been well-received by loyal customers and family.

“My niece also sells Easter gift baskets with cakes and chocolates and when she heard that I was making hot cross buns, she asked if I could add them in.

Over in Subang Jaya, hot cross buns are bringing communities and friends closer together.

Home baker Yeoh Suat Chu said she had just started a Facebook page on baking and gardening last month when a friend asked if she could bake the spiced rolls.

“I searched for a suitable recipe and opted for a traditional one with flour paste crosses.

“After baking a sample for her to taste, she placed my first ever order for hot cross buns.

“The buns are soft, fragrant with orange peel, cinnamon and allspice, packed with raisins and glazed with apricot jam, ” said Yeoh, 58, a retired school teacher.

With 25 packs ordered for this week, Yeoh, who is a Buddhist, said she researched the significance of the buns and sourced some information from her friend before baking them.

“It has made baking them more meaningful for me. Before this, all I knew about hot cross buns was the nursery rhyme!” she said.

Some hot cross bun offerings are also fresh alternatives from the usual variety.

In their Penang and Klang Valley branches, Yin’s Sourdough Bakery offers sourdough hot cross buns with orange peel and a twist of kefir while VickedGood in Damansara Perdana has vegan hot cross buns up for order.

“We love baking hot cross buns, partly because of the symbolism behind it but mostly because we just love the taste and texture.

“Our vegan buns are made from 100% plant products, which means they have no animal or animal-derived products such as eggs, milk, and butter.

“This makes our hot cross buns a healthier option to savour during the season, ” said Sheila Philip, one of the bakery’s three directors. 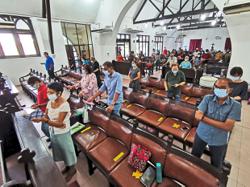