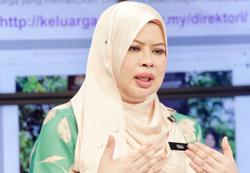 Ras Adiba said she had received several complaints from the PwD community on the Epoku application, and had contacted the Social Welfare Department (JKM) to resolve the problem.

Ras Adiba, who is also a member of the Dewan Negara, thanked the department for acting swiftly in resolving the problem.

Among her suggestions were requesting that the department extend the period for renewal of Epoku applications from one year to two years.

"Secondly, requesting that the PwD community go to the nearest JKM to update the Epoku three months before the deadline.

"Thirdly, asking the PwD community to update the JKM with their latest address and telephone number, in the event of any changes, ” she said Wednesday (March 31).

Ras Adiba, who is also the president of non-governmental organisation OKU Sentral, also requested that the welfare department officers be more active in the field to help with the registration of the PwD community.

She also suggested that the department not ask for a doctor's confirmation letter for individuals with permanent disabilities during the process of renewing the Epoku application, and hoped that the officers would use some discretion in the matter.

In the meantime, Ras Adiba also hoped that the PwD community will always be aware of the current situation and provide solid cooperation to JKM.

"The rights and dignity of PwD must and will remain one of the core agendas to be strengthened so that the prosperity enjoyed in this blessed land can benefit and be shared by all, ” she said.

Epoku is a form of assistance for PwDs to encourage them to continue working, live independently and become productive members of society. - Bernama