He said the party welcomes the statement by Sabah Umno chief Datuk Seri Bung Moktar Radin to stick with GRS at the state level despite the Umno headquarters’ stand to sever ties with Parti Pribumi Bersatu Malaysia in the next general election.

“This will ensure development for Sabah and its people will be realised, ” Firdaus said in a statement yesterday.

Firdaus said Sabah Bersatu is confident that under the leadership of Chief Minister Datuk Seri Hajiji Noor and Bung Moktar as deputy, the state will continue to progress.

“The GRS government’s main focus will be to implement plans for the benefit of the people. The time has come for all to come on board to help the people, ” he said.

He added that the multi-party GRS has the right “ingredients” to bring more development to the state.

Firdaus was commenting on Bung Moktar’s assurance that he would defend GRS following Umno’s decision to break ties with Bersatu at the federal level. 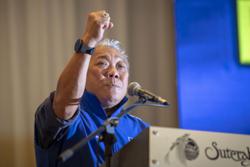