Besides meeting with the 26 Bersatu division chiefs, Tan Sri Muhyiddin Yassin, who is also the state party chairman would also be chairing the Johor Perikatan Nasional meeting at a hotel there on Wednesday (March 31).

The meeting comes following the outcome of the Umno general assembly over the weekend, which saw the party endorsing the decision not to work with Bersatu during the next general election (GE15).

Tosrin, who is also the state Islamic Religious Affairs Committee chairman, however declined to give more details on the agenda of the meetings.

"Please call me in the evening after the meeting is over.

"The meeting is supposed to be held today (March 30) but has been postponed to tomorrow (March 31), '' he said when met during a state government event.

It is learnt that one of the agendas to be discussed was the remarks made by Hasni during the final day of Umno general assembly on Sunday (March 28).

Hasni, whose administration is holding on by a majority of just one seat, said it feels like “an egg sitting on the tip of a horn”.

He added that Muhyiddin had asked Umno to make way in Pagoh in GE15 but the state Umno chief said surveys showed that the Malays in Johor preferred Barisan Nasional or Muafakat Nasional to Bersatu.

Hasni said he has to respect the wishes of the Pagoh Umno division to contest in the parliamentary seat and received loud applause for putting party over friendship with Muhyiddin. 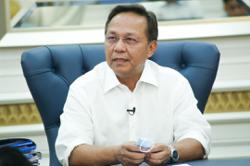