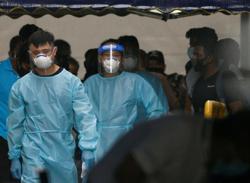 Happier times: See (right) chatting with Hoo at their home in Johor Baru before she passed away last month.

JOHOR BARU: Even up to her dying breath, a 74-year-old Singaporean woman staying here refused to return to the island-republic as it meant that she would have had to part with her partner of more than 40 years.

See May Hua, met and fell in love with Hoo Huan Pui, 78, in Singapore back then while both of them were working there.

Hoo said she moved in with him at Jalan Wadi Hana here shortly after that and commuted daily across the border for work as a food stall helper.

“She was willing to go through all the hassle and commute even when public transportation was not as accessible back then, but she never once complained about it, ” he said when met at his house yesterday.

As age caught up, See’s health and eyesight deteriorated. Her condition worsened recently after she fell while on an escalator at a mall here last month, Hoo said.

“She became wheelchair-bound after the fall.

“Even when Stulang assemblyman Andrew Chen visited in January and offered to assist her in returning to Singapore, she refused.

“She knew it would be difficult for us to reunite again as the borders were still closed due to the Covid-19 pandemic, ” he said, adding that See also suffered from diabetes.

He said See passed away peacefully on Feb 22 morning.

Hoo said he was thankful that with the help of the Singapore Consulate-General in Johor Baru, he was able to see her for one last time before she was cremated.

He also managed to personally scatter her remains into the sea on March 26.

“She once told me that she had an elder brother, but I think he is no longer around. I doubt she had any other relatives.

“She had a tough childhood, which forced her to start working at a young age.

“I understood why she preferred to stay in Johor Baru.

“Now that she is gone, my niece has invited me to stay with her in Melaka but I am still thinking about it as interstate travel is not allowed, ” he said, adding that he receives assistance from non-governmental organisations and a church group from time to time.

The Singapore High Commission and Consulate-General in Johor Baru, through its Facebook page, announced that it was looking for friends and family members of See, whose date of birth was Jan 22,1947.

Those who know her or have any information about her or her family members are urged to contact the Singapore Consulate-General in Johor Baru at 019-7911 166.