SEPANG: The industrial sector has been urged to adopt rivers in Malaysia to contribute towards environmental sustainability efforts.

“All this time, the industrial sector has been viewed as a contributor to pollution and we would like to change that image.

“For example, for a 30km-long river, a factory can adopt a 200m stretch (and the area) will be under its supervision where it will also bear the maintenance cost as well as participate in cleaning initiatives with its employees, ” he said.

He said this after officiating the National River Trail programme organised by the National Water Services Commission (SPAN) at Sungai Jenderam, near here yesterday.

Meanwhile, SPAN in a statement said it has adopted the 2km stretch of Sungai Jenderam in Kampung Jenderam Hulu in support of the programme.

“The main goal of this programme is to develop the banks of Sungai Jenderam as recreational areas and public parks by involving the public, local communities, NGOs and government agencies, ” it said.

SPAN added that with the initiative, they hoped communities would be more involved in maintaining river cleanliness and appreciate the river as their water source as well as appreciate the flora and fauna surrounding it.

In Port Dickson, the Negri Sembilan government has identified four river trail locations as new tourist attractions in the state under the National River Trail Programme.

“First, we proposed 10 areas but we identified four.

“Building these river trails will include the construction of pedestrian walkways, cycling paths and infrastructure facilities for the public, ” he said.

He said, to date, the existing river trails in the state are 52.23km long.

Meanwhile, commenting on the RM15bil Kuala Linggi International Port (KLIP) project, Aminuddin said the state government has sent a letter to the Melaka government to fine-tune the project before it would agree to it.

He, however, said the Negri Sembilan government does not have any issues regarding the project if it is implemented in Melaka.

“We have no issues but we will object if they (Melaka government) do not abide by the rules and the fishermen are not given their dues, ” he added. — Bernama 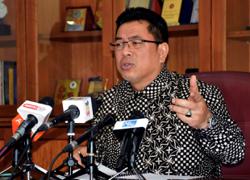