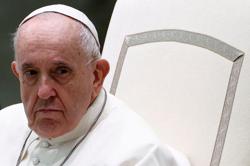 Association of Churches in Sarawak (ACS) chairman Archbishop Simon Poh said the Unit for Other Religions (Unifor) had obtained approval from the state disaster management committee for churches in green and yellow zones to open for Holy Week services with up to 50% capacity and physical distancing of one metre.

Churches in orange and red zones remain closed to the public, but are allowed to conduct Holy Week services with a maximum of 20 assigned persons.

Poh said the 20 persons allowed in red and orange zones were priests or pastors and church helpers directly assisting them during the masses or services.

"I understand that as many of our churches are in red and orange zones, allowing masses or services with 20 persons is a concession for Christians to celebrate Palm Sunday, the Lord's Supper on Thursday, commemorate Jesus' death on Good Friday and celebrate Christ's resurrection on Easter Sunday," he said in a statement on Saturday (March 27).

As of Saturday (March 27), six districts in Sarawak are green zones and 20 yellow zones, while two are orange and 12 red. Among the red zones are the major urban districts of Kuching, Miri, Sibu and Bintulu.

Poh noted that for Christians, Holy Week was the most sacred week in the year.

"Though congregations are not allowed in churches in red and orange zones, the designated 20 church leaders will represent us to pray during this sacred Holy Week for all people in Sarawak, our nation and the world during this global pandemic," he said.

He also emphasised that it was the responsibility of all churches holding services to fully comply with Covid-19 standard operating procedure (SOP).

"On behalf of ACS church leaders, I take this opportunity to bring the greetings, peace and blessing of Holy Week and Easter to all Christians and people of goodwill," he added.