KEPALA BATAS: Throughout his 15-minute ride in a police patrol car, not once did six-year-old Muhammad Firash Arrayan Muhammad, who is suffering from leukaemia, remove the blue beret he proudly wore as a policeman for a day.

Muhammad Firash got his wish fulfilled when he joined the police squad for patrol duty around the neighbourhood, in a patrol car with its siren blaring.

The boy from Bertam had always dreamt of becoming a policeman, but his hopes were dashed after he was diagnosed with leukaemia two years ago.

His mother Aida Royani Abdul Razak, 30, said Muhammad Firash has exhausted all available treatment and is now spending his critical final days at home doing what he loves.

“When we told him that he will be getting to ride in a police car, his eyes beamed with excitement and he couldn’t stop thinking of it.

“He then kept reminding me even before he went to bed. Cop for a day: Muhammad Firash saluting as ACP Noorzainy presents him with a police car model before taking a ride in a patrol car. — ZHAFARAN NASIB/The Star

“This morning, he got up from bed and immediately looked forward to head for a ‘mission’ here, ” said Aida, who accompanied Muhammad Firash in the patrol car ride from the district police headquarters in Bertam here yesterday.

Throughout the ride, Muhammad Firash, who was wearing the beret belonging to ACP Noorzainy, excitedly waved to several passers-by.

He was also presented with a diecast model of the Royal Malaysia Police version of the Honda Civic, the same model he took the ride in yesterday.

ACP Noorzainy said despite the hectic schedules of policemen on duty during the Covid-19 pandemic, the police have not neglected in reaching out to the people.

“We still continue with community services to bring joy to many, ” he said.

Earlier, ACP Noorzainy who officiated at the district-level Police Day celebration with some 300 policemen, said the crime rate in Penang saw a decline this year compared to 2020. 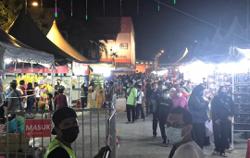