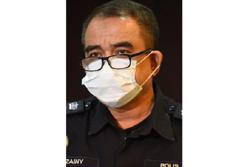 "Police personnel found a packet of heroin weighing about 456g and seven packets of syabu weighing 194g on him," he said in a statement on Friday (March 26).

ACP Noorzainy said the drugs seized from the suspect are believed to be for local distribution, adding that a motorcycle worth RM6,000 was also seized.

"The suspect has no prior record and will be remanded," he said adding that the case is being investigated under Section 39B of the Dangerous Drugs Act 1952.