Tengku Razaleigh posted on Twitter a picture of the meeting, which took place at his home at 9.27pm on Wednesday (March 24).

“Getting a visit from Datuk Seri @DrZahidHamidi and Datuk Seri @NajibRazak, ” he said, complete with a picture of the three of them wearing a face mask and observing physical distancing.

On March 5, Tengku Razaleigh, who is known as Ku Li, called on Umno leaders to stop all the “melodrama” and severe ties with the Perikatan Nasional government immediately.

The Gua Musang MP also suggested that the party supreme council hold a meeting soon to denounce its decision to stay with Perikatan until Parliament is dissolved. 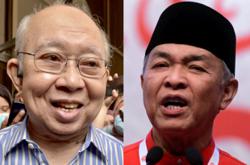