MELAKA: The Melaka Government will continue to entrust the Alor Gajah Municipal Council (MPAG) and environmentalists with safeguarding the flora and fauna of the Rembau-Linggi mangrove forest, located in the estuary areas along the border of Negri Sembilan and Melaka.

Melaka rural development, flood management and green technology committee chairman Datuk Seri Idris Haron (pic) said MPAG and environment groups were still needed although the management of the mangrove forest has been handed over to the Melaka Forestry Department.

"We need more expertise in caring for the fauna and flora on our (Melaka) side and we will continue engaging them despite handing over the safekeeping of the site to the Forestry Department," he said here on Tuesday (March 23).

He said the state government would make sure that issues like illegal sand mining and dumping do not pose a threat to a firefly colony on the Negri Sembilan side.

On Sunday (March 21), Melaka Chief Minister Datuk Seri Sulaiman Md Ali announced that the management of five reserve and recreational forests in the state would be returned to the Forestry Department.

Sulaiman said the management of these forests was placed under Kumpulan Melaka Berhad (KMB) from 2012 until the decision to hand over the management to the State Forestry Department was made last month. 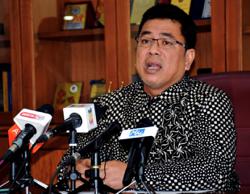