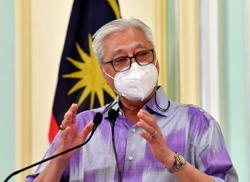 SIBU: Villagers can rest easy after a 4.5m-long crocodile was caught in Batang Oya, Dalat.

The reptile was captured here yesterday, 10 days after the bait was set up by the Sarawak Forestry Corporation (SFC).

the huge crocodile had been spotted in the saltwater river.

He said SFC personnel set up the bait while the police provided security when patrolling the area.

“It was a challenging operation as they were exposed to hot weather and rain almost every day.

“The team also had to conduct night patrols as crocodiles are most active then and easier to spot, ” he said yesterday.

DSP Saga added that when a crocodile was sighted, they would set up a bait near it.

“Setting up the bait is the most dangerous task as we have to be close to the reptile.

“This is also to enable the team to assess the size of the crocodile, ” he said.

He added that during one of the night patrols, the team recorded 22 sightings of crocodiles.

According to DSP Saga, adult crocodiles posed a threat to the people who depend on the river for their livelihoods. 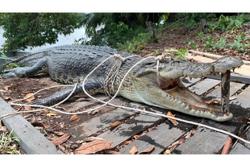