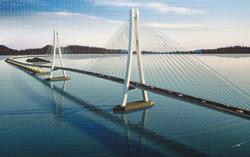 KUCHING: The Batang Lupar bridge will be a key component in Sarawak's coastal road network when it is completed in 2025, says Datuk Patinggi Abang Johari Tun Openg.

The Chief Minister said the bridge was a vital link to connect the state's coastal areas.

"Once the bridge is completed, we will be able to open up new areas for development and agriculture," he said at the ground-breaking ceremony for the project in Sebuyau, about 109km from here, on Tuesday (March 23).

Abang Johari said the RM848mil bridge was fully funded by the state government after the project was cancelled by the previous Pakatan Harapan federal administration.

He said the state government was also committed to building other bridges along the coastal route to replace ferry services and provide a seamless road network.

"The coastal road is 896km long and a big part of it needs bridges. The cost of all the bridges are borne by the state government except the Batang Samarahan and Batang Sadong bridges, which were borne by the earlier federal government under Barisan Nasional," he said.

He also pledged that there would be no toll charges for using the bridges.

Deputy Chief Minister Tan Sri James Masing said the Batang Lupar bridge was one of 11 major links to be constructed in the coastal road network, which will serve 65% of the state's population.

"These bridges are built with a construction cost of not more than RM4bil. Building these bridges is half the job done.

At 4.8km long, the Batang Lupar bridge will be the longest river-crossing bridge in Malaysia.

The project is scheduled to be completed on Jan 6,2025. 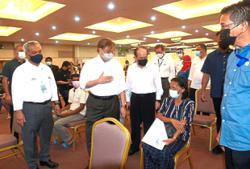