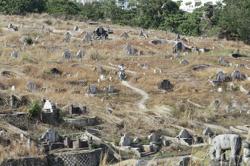 GEORGE TOWN: Except for some grave cleaners, most cemeteries here appeared deserted in the lead-up to Qing Ming.

This is unlike previous years where Chinese families would begin going to the cemeteries to make offerings to their ancestors and departed loved ones as part of an annual ritual which falls on April 4 this year.

Checks at several cemeteries on the island and mainland found no family members there to offer prayers.

Several grave cleaners were around to do some weeding and clean the tombstones.

Among them helping to clear up weeds around a tomb in Paya Terubong was Chong Tong Huat, 48, who felt that this had been a quiet Qing Ming so far.

Chong, who was glad to get some work at the cemetery, said it had never been this quiet in his 10 years of experience cleaning tombstones.

“Usually before the festival starts, customers would book my services to clean their ancestors’ tombs.

“Last year, I received a reasonable number of bookings before the first MCO (movement control order) was announced.

“But this year, the bookings I got were vastly reduced.

“Now with prayers for Qing Ming allowed by the government, we hope business will get better, ” he said.

It is a similar situation at the Chinese cemetery in Penanti and Berapit on the mainland where thousands of tombs were bare with no prayer paraphernalia seen.

Businessman Jerry Goh, 55, who had never missed conducting rituals for his late parents at the

Batu Gantung cemetery since they died 12 years ago, said he would “wait and see” before deciding how he would mark the occasion this time.

Hawker Lim Keng Boon, 37, said his family had decided to “scale down” their way of observing Qing Ming this year.

“We already missed out Chinese New Year this year and might as well give Qing Ming a miss, ” said Lim.

Last week, the government announced that fines would not be imposed on cemetery operators but on individuals who violated the SOP during Qing Ming.

The SOP will apply 14 days before and after the actual festival date, that is, from March 20 to April 4 and from April 5 to 18.

Among others, the SOP stipulates that there should be no more than six close relatives at any one time and prayers limited to a maximum duration of 90 minutes to be conducted between 5am and 6pm.

For columbariums, only 10 people are allowed at any one time in states under MCO and 50% capacity with physical distancing for conditional MCO areas.

Prayer times for columbariums in MCO, conditional MCO and recovery MCO areas should be between 5am and 6pm, and the duration is limited to 60 minutes, with sanitisation work carried out in between.

However, cemetery operators in Penang from 18 associations decided not to open up for Qing Ming, including columbariums as they were of the view that it would be tough to ensure SOP compliance in the open areas.

Meanwhile, Chinese cemeteries in other states are preparing to re-open for Qing Ming.

The Federation of Chinese Cemeteries Malaysia president Chen Zhang Xing said they had been reassured by the latest decision that individuals who violate any Covid-19 standard operating procedure during Qing Ming would be fined, rather than the cemetery management, reported China Press.

He added that they were ready to announce their re-opening for Qing Ming in April. 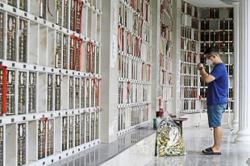