KOTA BARU, March 20 (Bernama) -- The government considers the issue of compounds for violations of the Covid-19 standard operating procedures (SOPs) as settled, and enforcement teams have been reminded to issue summonses only as a last resort, says Datuk Seri Takiyuddin Hassan.

The Minister in the Prime Minister’s Department (Parliament and Law) said, for example, in a situation where many people failed to observe the SOP, enforcement officers would first give advice and warnings.

"If they still refused to comply, then summonses would be issued as the law has to be enforced, ” he told reporters after presenting tablets to schoolchildren in the Kota Baru parliamentary constituency here Saturday (March 20).

He said new guidelines on the three categories of offences had been issued, with the differing amounts for compounds spelt out.

"Where there is law, there is a need for fines and penalties. If there is still confusion on this issue, I would urge all community leaders to explain to the rakyat to clear the air, ” he added.

On Wednesday (March 17), Takiyuddin said the Cabinet had agreed to set the guidelines on the value of compounds and discounts for various offences, following complaints over compounds of up to RM10,000 for individuals and RM50,000 for companies.

They include an offer of 50% or 25% discounts to individuals or companies who settle their compounds within a specified period.

The guidelines spell out offences under three categories - high, moderate and normal - with their corresponding compound values. - Bernama 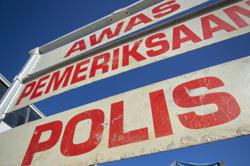