The national party assistant organising secretary said his actions had tarnished the party’s reputation and his own public image.

“I do take responsibility for the said incident," he added.

The incident broke out after Su alleged that others held an unfair advantage in the state polls.

He claimed that the registration of delegates was not conducted fairly as it went past the deadline set.

Su said he hopes the party central executive committee would look into his explanation of what transpired.

“I also implore them to take the necessary action to investigate my concerns.

“I believe my hope is in line with what DAP has been striving for; fair and transparent elections, ” he said.

Su recounted how the registration of delegates was still ongoing even though the convention had already started.

“I made enquiries and discovered that the attendance list was used by a certain group of people and individuals to call and bring in more delegates even when the meeting was already in progress which I felt was improper.

“At that juncture, I objected to such acts and requested that such acts be ceased or that I should also be allowed access to the said register roll list, ” he said.

“However, my objections were not heeded in which I felt were against the fundamental beliefs of DAP which had prided itself in fighting for transparency, accountability and democracy.

“Against my better judgment, I lost my composure and raised my voice which triggered a war of words between members that snowballed.

“On hindsight, I ought to have raised my concerns in a more appropriate manner and forum, ” he said on his Facebook page.

National organising secretary Anthony Loke had on Monday (March 15) said that the polls were conducted transparently. 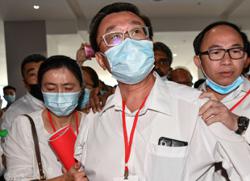